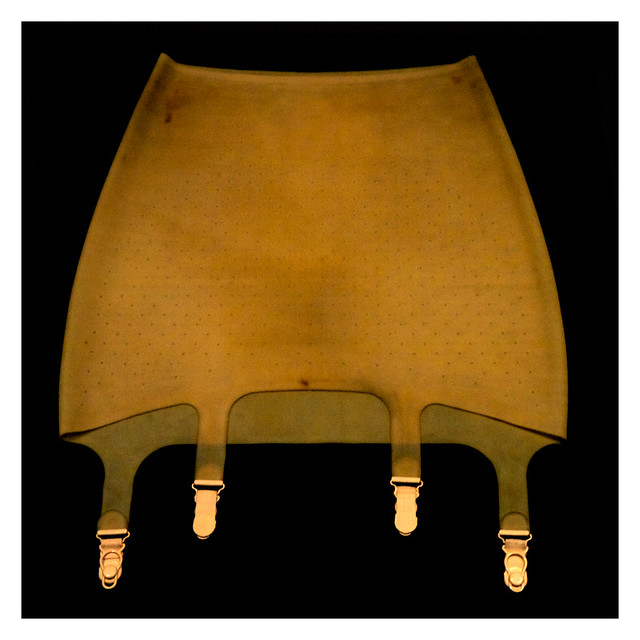 I blame my sister for my near death experience on Saturday.

After all, it's her fault I wore the damn contraption.

Or maybe it's my fault for being weak.

I allowed her to prey on my insecurities and in the process, almost lost a lung.

"You'll go from so so to va va voom," she promised.

I succumbed to the promise of looking one size smaller.

I gave in to the allure of a more refined silhouette; one without lumps and bumps.

I caved to the convincing arguments of, "That black mini deserves to drape over a tight bum, not one that's twice the size of Texas ."

She continued to argue her case.

"I can't believe you've denied yourself the possibility of looking fabulous for two years. Cause I gave you that thing two years ago, you know. Come on! You'll come home tonight and tell me how everyone complimented you on your weight loss."

Those seductive promises almost cost me to pass out in a stranger's bathroom.

Yes, now that I think about it, it's my fault.

Because I should never had let my sister convince me that wearing shapewear was a good idea.

And because I should've known that beauty always comes with a price.

Nevertheless, I listened and the minute I hung up the phone, went in search of the miracle underwear that was to transform my body into pin up girl perfection.

I had an hour to get ready.

A friend of the Significant Other was picking us up to go to another friend's birthday party.

Not having been out in some time, I thought it would be nice to wear some decent clothes; the kind that doesn't have an elastic waistband.

As I searched my closet for the wretched shapewear, something told me I should abort and ignore my sister's promises.

But as fate would have it, I found it a second later.

And a minute later, the tugging commenced.

I was successful in getting it past my knees.

I stopped to catch my breath before continuing.

"Don't worry if it feels tight. It's supposed to be that way or it won't make you look like you've lost ten pounds."

Tight was the understatement of the century.

Something told me this thing would have to be surgically removed.

Invoking the gods, I tugged with all my might and managed to get it past my hips.

I should have stopped at that point.
Refused to wear it.
Taken it off.

Like a marathon runner in a race, I realized I had come too far to go back.

Two more Herculean tugs allowed the blasted thing to make it to my armpits.

Contorting my body left and right, I managed to accommodate the straps.

Looking at myself in the mirror, I realized the hideous shapewear had found something that had been lost since I became pregnant many decades ago: my waist.

I had a waist!

I did a victory dance, clapped my hands, and laughed with glee.

Little did I know that an hour later I'd be hyperventilating, light headed and one breath away from being on the transplant list.

We arrived at the friend's house an hour later

I wished him a Happy Birthday, took a seat in the living room, and readily accepted a glass of wine.

Realizing the shapewear contraption wouldn't allow me to eat more than an olive, I thought my body at least deserved alcoholic hydration.

Two sips later I felt the need to pee.

I asked my new friend where his bathroom was and half way there, realized it had taken me more than 20 minutes to put on the shapewear.

I quickly calculated how long would it take me to get it off and on again.

I should have said no to the wine.

But it was too late and I found myself being directed to the smallest bathroom in the history of the world.

It was the size of a cubicle.

Bending over almost caused me to bonk my head on the sink.

Twisting to the side resulted in jamming my knee on the toilet roll holder.

I desperately searched for the shapewear's crotch-release, only to realize the hooks were so far back, there was no way I could reach them.

Had I put the damn thing on backwards?
Impossible, since the bra part was in the front.

I realized I'd have to take off all my clothes.

Everything would have to come off.

I opened the medicine cabinet and searched for a pair of scissors.

I would cut the damn thing off.

But my search only turned up a tube of toothpaste, dental floss and a bottle of multivitamins.

So I undressed until I was down to the shapewear.

Surprisingly, it was easier to take off than it had been to put on.

I sighed with relief.

Having finished my business, I took to replacing the contraption with the sheer determination of accomplishing the mission in less time than it had taken me back at the house.

Tugging and pulling, I pressed forward.

Sweating like a pig on a spit, I managed to get the deadly thing up to my belly.

I felt like the character in the film, "Groundhog Day."

I was going through the same motions but the tiny bathroom was only a tenth of the size of my bedroom.

Yanking and stretching, I successfully got the evil spandex over my chest, but just as I was going to put on a bra strap, I felt my breath catch.

It was as if the metal underwire had sprung loose and pierced one of my lungs.

Gasping for breath, I just wanted to tear it off my body.

I heard a sharp knock on the door.

I heard the Significant Other whisper, "What the hell are you doing in there? Everyone's asking where you are!"

I managed to hiss, "Get out of here!"

Down to my last breath and on the verge of passing out, I mustered enough strength to put on the other strap.

I finished dressing, but not before jamming my knee against the door and making hole in my tights.

"Your body will look like Marilyn Monroe's," my sister had promised.

I wanted to kill her.

Glancing in the mirror I realized my face was shiny, my hair was starting to frizz, and my mascara had smeared.

If I managed to live through the evening, I was determined to sue my sister and Bali shapewear for every dime they owned.

I cleaned myself up, pulled the mini over the hole and whispered in pledge-form, "Never again will I wear shapewear, even if it means I won't look a size smaller. And I solemnly swear to get my sister back, if it's the last thing I do."

Has your experience with shapewear been anywhere near as bad as mine?

71 thoughts on “Are you sure this thing will make me look a size smaller?”