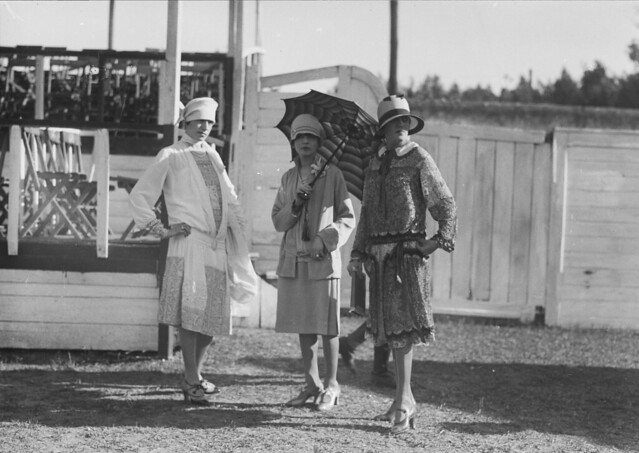 Anyone who is a regular reader of my blog knows I’m not one to do reviews or product recommendations. The reason for this is that rarely do I come across something worthy of a “five-star rating.”

Family and friends think I’m too critical. I like to think of myself as someone unwilling to waste time on an endeavor whose outcome will more than likely be lacking. Sadly, the times I’ve been betrayed by reviews, trailers, and media hype are too many to count.

That said, today I come to you bearing news of a Netflix program I think is worth every second of your time. There’s a caveat of course–you must be subscribed to Netflix. However, if you’re a lucky subscriber, I highly recommend adding “Las Chicas del Cable,” or the “Cable Girls,” to your playlist. While the narration is in Spanish, English subtitles are available and do not detract from your viewing experience.

The setting? A realistic representation of life in Madrid, Spain in the late 1920’s.

The costumes? Clothes that will make any vintage fashion addict drool. Iconic flapper style comprised of cloche hats, long necklaces, and shift dresses with dropped waistlines in luxurious fabrics. (All of which serves to remind me I was born in the wrong era.)

The plot? The portrayal of the interwoven lives of four women who meet at a telephone company on the day when interviews for the position of telephone operator is being conducted.

Once hired, the women will spend their day answering and connecting calls on a massive switchboard. Their connection (pardon the pun) is not immediate. Yet as the story unravels, it paves the way for the kind of loyalty and solidarity that epitomizes true friendship.

The characters? Four women named Angeles, Carlota, Marga, and Lidia. Their personalities are totally different, yet they share the desire to reinvent themselves. All the way from being a victim of spousal abuse to running from the law, they’re all looking to escape their actual circumstances. Each one is struggling to become independent; to assert herself and fight for the rights of women.

Yes, folks, this gem of a show has a feminist message. The characters remind us how far women have come in the fight for equality as well as the many challenges we still face today. Their search for freedom, independence, a career, and love remind us of the sacrifices we make in a world that continues to be unfairly run by men.

Episode after episode, I find myself cheering on these courageous women. And while the male characters are necessary for story development, it is the representation of the sisterhood that keeps me coming back. I am overjoyed by the message of female empowerment and the reminder that women need to lift each other up instead of tearing each other down. If you’re in search of a show that does more than entertain, you’ll find “Las Chicas del Cable,” will not disappoint.

Have you watched the show? 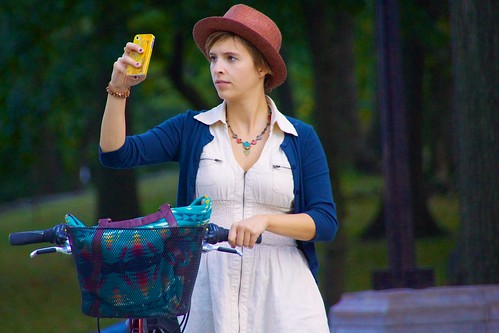 All the way from Istanbul, to Buenos Aires, to one horse towns and villages all over the world. It’s here. And it’s here to stay.

From the young to the elderly, from blue-collar workers to the Commander-in-Chief.
The selfie taking practice is being embraced by all. So much in fact, we can’t but wonder if it confirms we’re a narcissistic society.

Looking over my son’s shoulder as he browsed through Facebook this morning, I couldn’t help noticing the dozens of selfies of his young friends. Young women, in an array of poses, ranging all the way from the “head cocked to the side” position, to the “OMG, is this still going on?” duck lips.

Later today, just seconds after I posted my own selfie to Instagram, I pondered the reasons that motivate us to share our mug with, for the most part, strangers.

Do we do it as a way of recruiting external validation, or does vanity propel us to use the selfie to document our beauty?

Were these selfies to be unedited and “au naturel,” perhaps the subject wouldn’t bother me.

Yet, looking at my own Instagram selfie, edited with various filters and a blur effect, I realize we aren’t presenting our “true” selves to the world.

The selfie appears to be another way to conform to society’s definition of beauty; one whose sad message is that you’re only beautiful if you look a certain way.

“Not everything is motivated by the evils of society, mom,” chided the Son when I broached the subject at the dinner table. “Sometimes,” he said, “a selfie is just a selfie.”

But is it? Thinking back to the heavily edited selfies I saw this morning, I’m not so sure.

In all fairness, I’m certain there are those who take selfies for the sake of documenting a bad hair day. Others might take them to evidence what they look like at a certain age.

Yet the fact that so many of us partake in the selfie phenomenon raises the question of, do we need others to tell us we’re beautiful?

And that makes me sad.

Sad because, even words like “You’re beautiful,” aren’t going to help if we don’t believe it ourselves.

Sad because we may always depend on someone to validate us.

Sad because we are placing so much importance on physicality and so little on what truly establishes our worth.

Sad because the majority of selfies aren’t true representations of what we really look like.

Sad because in hiding behind an edited selfie, we fail to show the world our true beauty, complete with enlarged pores and imperfections.

We may not be able to stop the selfie phenomenon, but we can refuse to play by the rules of peers, society, and our own insecurities.

We can turn the selfie on its head and instead, use it as a tool to affirm, “This is me. This is what I truly look like and I am beautiful.”

Inspired by my sister, who posted a selfie of her beautiful, unedited self on Facebook, I took a selfie tonight.

No make up.
No edits.
Just me.

Join me in the effort to turn this phenomenon into something positive by posting your own beautiful unedited selfie.

Let us effect positive change in how the world defines beauty.

Show the world the beauty that is you!

Note: If you post a selfie, please leave a link in the comments section so other readers can see it.

I would love it if you followed me on Instagram. You can do so by clicking on this link or the icon located on the sidebar!

I wanted to start off this post expressing my gratitude to all of you for asking me how my knee is doing.

I also wanted to give you an update.

After four months of being diagnosed with a tear in the meniscus, I seem to be improving slowly.

There are days I think my knee is never going to produce scar tissue and I’m going to be left hobbling like a hobbit forever.

Nevertheless, I continue to wear my brace, elevate my leg, and sleep.

I find myself sleeping a lot.

Which is funny, given I’ve suffered from insomnia for most of my life.

And because I find myself dozing off during the day, I’m awake at odd hours of the night.

So, much like a vampire, I find myself meandering through the house, looking for something to nibble on, donning my blanket as a cape.

Sadly, little Roxy has also adopted this sleeping/non-sleeping pattern and seems to be eating round the clock.

We’ve come to embrace this way of life.

So much in fact, that we’re ready to audition as extras in the next Twilight sequel.

Last night, as I tossed and turned on the uncomfortable little couch in the family room, I thought it best to get up and find a way to induce sleep.

As I browsed the list of the many TV episodes I haven’t watched, I came across one of the last episodes of Arrow.

I don’t know what made me think watching this show was going to make me sleepy.

Because one minute into the episode, watching the protagonist train bare-chested and glistening with sweat, I was salivating like one of Pavlov’s dogs.

And no, on this occasion I will not apologize for objectifying this amazing specimen.

Glued to my computer screen, hot tea dribbling onto my pajama shirt, I sat mesmerized looking at the most sculpted abs I have ever seen.

Roxy, aware of my drooling, jumped on the couch to see what was causing my hypnotic state.

Halfway through the episode, the desire to sleep long forgotten, Diggle, another male character, appeared shirtless.

At this point, I frantically looked around the room searching for anything that could substitute for a paper bag.

You know, in case I started hyperventilating.

Yet, it seems unfair to discuss these characters without giving a synopsis of the show.

The show Arrow, a modern depiction of the DC Comic character Green Arrow, features billionaire playboy Oliver Queen, who after being shipwrecked on an island for five years, returns home to Sterling City. His family soon comes to realize that Oliver is a changed man. However, Oliver is not the only one who has changed. His beloved city has taken a turn for the worse–overwrought with crime and corruption, it is now at the hands of criminals who exploit the innocent. With the help of his bodyguard John Diggle, Oliver will assume the identity of Arrow, a vigilante whose mission is clean up the city and right the wrongs committed by his father. The show airs on the CW on Wednesday at 8pm, eastern standard time.

And there you have it.

If you haven’t seen this show, I highly recommend it.

It is action packed, the acting passes muster, and it features men who are more than willing to whip off their shirts.

Nevertheless, because the show doesn’t feature a warning, I feel it my sisterly duty to provide one.

Not recommended to those battling insomnia. Viewing the male characters may cause heart palpitations, impair your ability to speak, and produce sweaty palms. Use care until you become familiar with the plot and the protagonist’s insistence to bare his chest and perform the “salmon ladder” stunt, in which he hoists himself up a series of metal rungs whilst only holding a long, metal bar. Other symptoms might include vertigo, excessive salivation,and biting of the lips. Proceed to watch only after you have passed a physical exam and/or your physician has given you green light. Repeated viewing may cause addiction and drooling. It is recommended you have a paper towel with you at all times. Interrupted viewing may result in withdrawal symptoms.

Watch at your own risk!

Have you watched the show Arrow?

Disclaimer: The following post is written for entertainment purposes only and does not offer real psychiatric or medical advice. Information provided in the post should not be construed as professional advice. In addition, while I don’t support the objectification of men or women, comments provided in the post serve to confirm that the CW has been successful in targeting a female demographic.