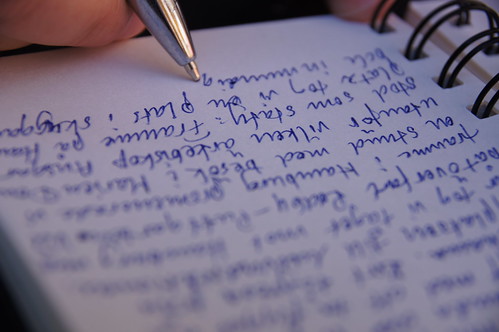 There are many reasons why bloggers choose to blog.

Some do it because it’s a great way to practice writing skills.

Others do it because blogging can be a great creative outlet.

And some aspiring writers do it because it’s important for them to have both a blog and a regular readership.

Nevertheless, there are also some who do it because blogging is a great way to build friendships.

I am one of those people.

When I first started blogging, my readership consisted of the Daughter, who read every now and then and rarely commented, my sister, who read rarely but commented every time she read, and the Significant Other and the Son, who never read but were forced to listen to my posts as soon as I wrote them.

This quickly changed as more people began to read my blog.

As my readership grew, my family members seemed to disappear into the woodwork, never to be seen again.

You’d think this would make me sad, but it doesn’t.

I’ve come to realize that you can’t force people to do what you want them to do.

Actually, you could, but the results would not be pretty.

My point is that even while family members pulled a disappearing act, it didn’t matter.

Because I discovered that in other bloggers, not only did I have readers, but also friends.

Sadly, I have yet to meet any of the lovely people who take the time to read my posts, or leave a thoughtful comment.

Nevertheless, when I read a comment left by one of my readers, I feel like a dear friend has left me his or her thoughts.

With this in mind, I have something I want to say to you all.

I marvel at the encouragement and support your words inspire.

I get emotional whenever I read the lovely words you leave on the pages of this blog.

I sigh at the wisdom and intelligence exhibited by your remarks.

I giggle, chuckle, and laugh out loud as I read your funny comments.

Yes, we may not have met, but every one of you feels like an old friend.

Time after time, I have wondered what it would be like to host a party where you’re all invited; to sit down for a cup of tea or coffee; to laugh over a glass of vino.

I wonder what makes you laugh, smile, and cry.

I pondered this tonight as I lay out the items needed for tomorrow’s dinner.

And it occurred to me that today was the perfect time to express my feelings.

This post came together in a matter of minutes.

Because that’s what happens when you speak from the heart.

Tonight, I wish to express my gratitude.

And to everyone else, Happy Thursday!

Spoiler alert: If you haven’t yet seen the season finale of Grey’s Anatomy, you might want to wait till you do before reading this post.
I’m not one to watch a lot of television.

Yet there are a couple of shows I’m committed to.

One of these is Grey’s Anatomy.

Because of the time difference, I have to catch my favorite shows on iTunes.

This usually means I see them a day later.

Most of the time this isn’t a big deal, but today was different.

After having watched last week’s episode, I already knew one of the characters would die.

The fact that everyone in my family had already watched the show made me wary.

Fearing one of them would call and spoil it for me, I woke up early this morning, poured myself a cup of coffee, and sat down to see who Shonda had decided to kill off.

I already suspected who it might be, but in my heart I hoped I was wrong.

As the show enfolded, I was immediately sucked into the drama.

It was as if I too were a passenger on the plane.

In surreal fashion, I walked around the crash site searching for Derek.

I screamed when I saw the protruding bone in Arizona’s leg.

My arm literally jerked when Mark popped Christina’s shoulder back into place.

Yet this was nothing compared to the pain I felt when Lexie died.

Alone in my house, with Roxy on my lap, I cried.

I couldn’t believe this beloved character had been killed off in the first fifteen minutes of the show.

Or that Meredith hadn’t been given the opportunity to say goodbye to her sister.

Echoes of “Shonda, I hate you!” reverberated through the house.

In just two minutes, I had entered stage two of the grieving process: anger.

I paused the show and stomped around the living room.

I asked Roxy why it couldn’t have been Kepner, Teddy, or Adele.

I mean, it wasn’t like any of these characters had a story line worth pursuing.

Roxy stared at me as I continued to wail.

The fairy tale ending of “they lived happily ever after” was no more.

McSteamy would not marry the beautiful Lexie.

They would not have beautiful babies and live in a beautiful house with two dogs, a gold fish, and a cat.

The fairy tale had come to an end.

The ringing of the phone brought me out of my reverie.

I bleakly said hello into the receiver.

The Niece was on the other end and she sounded as indignant as I felt.

“How could she do this? You’re a writer. Help me understand! Why would she kill Lexie off and not drag out the scene with her and Mark? I insist you write that woman a letter of complaint and tell her she sucks! Tell her she sucks!”

“I say we boycott the show. Let’s start a petition and recruit people so they don’t watch the show anymore.”

“What was she thinking? Was this woman off her meds when she wrote this episode? Pathetic. That’s what she is. Absolutely pathetic.”

“I say we write her and ask, no, demand, she bring Lexie back like Lazarus. You know, like this was all a dream; like it never really happened.”

“No, really. That would be a great way to begin the new season. She could title the episode, ‘I’m bringing Lexie back.’ Get it?”

“Write a blog post or something. Recruit your readers to join us. Get them to write on those forum things you people write on. We need all the help we can get.”

“I have to go. I’m late for work and I still have to figure out how to depuff my eyes. I cried so much last night, I look like puffer fish.”

“Thanks, Auntie B. Great talking to you! Talk to your writer friends!”

As I hung up the phone, I smiled as I realized that without having been able to get a word in, the Niece and I had grieved together.

Fully entrenched in the anger stage, we had vented our disbelief and confusion at the actions of Shonda Rhimes.

This episode of Grey’s Anatomy also served to remind me of how important the characters of a story really are; of how readers and viewers bond with characters in such a way, that when one dies, it’s like a real friend has passed away.

We cry when they cry, laugh when they laugh, and celebrate their triumphs.

We cheer them on, encourage them to make decisions, and hurt when something bad happens to them.

Today, I am devastated.

For the life of me, I can’t understand why Shonda decided this was the best course of action.

I think it will be a while before I’m able to move on to the next stage of grief.

And truthfully, I may never be able to forgive Shonda Rhimes.

Were you disappointed that Lexy died?